Dwarf gouramis are a type of fish that is often recommended for beginners. They are a relatively easy fish to care for and they come in a variety of colors, which can add some excitement to your tank.

In this blog post, we will take a closer look at dwarf gouramis and explore some of the things you need to know before adding them to your aquarium. So, if you’re thinking about adding dwarf gouramis to your tank, read on for some helpful information.

All four species have some things in common. They are all relatively easy to care for. They can grow up to three inches in length, though most stay much smaller. The average lifespan of the dwarf gourami is about five years, but some have been known to live longer.

Dwarf gouramis are generally peaceful fish that will get along with other non-aggressive fish. They can be a bit more territorial during the breeding season, though they won’t normally cause problems with your other tank mates. Dwarf gouramis also come in a variety of colors and patterns, adding an extra splash of color to your tank.

There are a few things you’ll need to keep in mind if you want to house dwarf gouramis with other fish. The first is that the tank needs to be at least 40 gallons, but 100 gallons or more would be better. You should also make sure that your tank has an efficient filtration system, along with plenty of hiding places for the dwarf gouramis to retreat to when they feel stressed.

Dwarf gouramis are relatively low-maintenance fish. The tank just needs to be kept clean and you should feed them high-quality flake food every day.

Dwarf gouramis will also appreciate the addition of aquarium plants to their environment. You’ll still want to keep an eye on your tank and do your regular water changes, but generally speaking, maintaining a dwarf gourami tank is not difficult.

One thing you should be aware of is that dwarf gouramis tend to be jumpers. They can jump out of an open tank, so you’ll need to make sure your aquarium has a cover.

All fish have their own unique care requirements and keeping dwarf gouramis is not always as easy as it appears on the surface. One of the most common problems that fishkeepers experience with dwarf gouramis is their tendency to develop swim bladder disease. This condition can be fatal if not treated quickly and humanely.

Other health issues that dwarf gouramis are prone to include cloudy eyes and holes in their body, along with bacterial infections and parasites. You’ll need to keep a close eye on your fish and bring any health problems you notice to the attention of your veterinarian as soon as possible.

There are many different color variations of dwarf gouramis, including:

As mentioned above, during the breeding season, the males tend to be more aggressive. They may even fight with each other. However, in general, dwarf gouramis are peaceful fish that are generally easy to care for.

You’ll need to keep a close watch on their health though since they can develop some serious illnesses if not properly cared for. That’s especially true of the blue dwarf gourami, which is generally considered more difficult to care for than other varieties.

As far as lifespan goes, the average is about five years, but some dwarf gouramis can live longer than that.

As their common name suggests, dwarf gouramis are a smaller variety of their larger cousins, which include the chocolate gourami. These types of fish originate in Asia and they live along the banks of slow-moving rivers and swampy areas.

Because they prefer shallow water, dwarf gouramis should be kept in an aquarium with at least 5-8 inches on the bottom. This type of tank is preferable for a number of reasons, including the fact that it can be easier to keep your water parameters stable and will also help you avoid a lot of common fishkeeping mistakes.

Dwarf gouramis are members of the labyrinth fishes group, which means they have the ability to absorb oxygen from the air as well as from the water. This is why they are able to survive in those shallow waters.

In addition, dwarf gouramis have a labyrinth organ located just behind their head that allows them to breathe air from the surface of the water. This adaptation has earned them another nickname – “four-eyed” fish – because they actually have two eyes and two nostrils.

Mature male dwarf gouramis will build bubble nests when they’re trying to attract a mate, which you can see in the picture above. This is also why female dwarf gouramis are often referred to as “dither fish,” which means they are responsible for inducing male aggression.

Males won’t begin to build bubble nests until they are ready to mate with the females, so female dwarf gouramis will flock together in order to attract a male’s attention.

Once the male has become motivated enough to create his bubble nest, he will begin courting the female and she will follow him around. The female will lay her eggs in the nest, which causes the male to fertilize them so they can develop into fry.

This reproductive strategy helps avoid confusion because it allows males to know that their efforts are for breeding purposes and not simply aggression or intimidation tactics. After he’s done courting the female dwarf gourami, he will help her find another place to lay her eggs. This helps the pair avoid conflict.

Even though you can put dwarf gouramis in most community tanks, you need to be careful about what types of fish they’re housed with. Aggressive fish like cichlids or other carnivorous fish will definitely view these passive vegetarians as food, so you need to avoid all types of predators.

Even though male dwarf gouramis are known for being aggressive towards each other during the breeding season, they won’t usually bother any other species. However, just to be safe, it’s best to house them with other non-aggressive, smaller fish.

The most common issues that dwarf gouramis have to deal with involve their immune system failing them in one way or another. Since they are a very sensitive species, dwarf gouramis may not be able to fight off pathogens from other tank mates or from the environment.

In addition, dwarf gouramis are also susceptible to bacterial diseases, which is why you’ll need to keep a close watch on your tank’s water parameters and only introduce a few fish at a time.

Dwarf gouramis have special digestive tracts that are specially designed to handle their vegetarian lifestyle. Because they don’t eat meat, you only need to feed them algae-based food or special cichlid pellets that can help mimic the algae that they would normally consume.

Since dwarf gouramis aren’t aggressive predators like many larger species, you won’t need to worry about overfeeding them. Just feed your dwarf gouramis once or twice a day, ideally right before you turn the lights off for the night.

As long as you’re providing your dwarf gourami with quality nutrition, there are no other special diseases or disorders that are linked to their diet. If you notice any changes in their behavior or if they are being picky about food, consult your local aquarium store to see if they have any recommendations.

Even though it may seem like a lot of work to set up a tank for dwarf gourami, they are a truly unique species that will add something to your community tank. If you decide to get one, make sure to do plenty of research beforehand and make sure all of your water parameters meet their needs.

You can also ask your local aquatic supply store for help with setting up the tank and you may even be able to get your hands on some helpful starter plants. Once you set up your dwarf gourami aquarium, you will have a gorgeous centerpiece that everyone will admire! 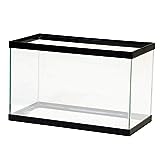