Dwarf gouramis are small, colorful fish with a reputation for being sociable. They make excellent community fish, provided they are housed correctly. This is not always the case, however, as even these peaceful fish can become aggressive if kept in an aquarium that is too small or overcrowded.

The specific requirements of dwarf gouramis vary depending on their habitat and evolutionary history, however, they all share a common set of needs.

Dwarf gouramis come from Southeast Asia and India, where tropical rainforests and swamps provide plenty of surface vegetation for them to dart into. They are also found in standing water such as rice paddies and ponds. These fish require a maximum aquarium size of 20 gallons, with a surface area more important than volume.

They prefer a heavily planted tank with a dark substrate. Decor should be arranged so that there is plenty of open space for the dwarf gourami to dart in and out of. They do not require a great deal of swimming space, however, if they are unable to choose where they go in the tank it can lead to stress.

Dwarf gouramis originate from standing water with lower oxygen levels than is found in most aquaria. Because of this, they prefer a high water quality and a slightly acidic to neutral pH. The addition of live plants will help maintain these conditions.

Wild dwarf gourami are omnivores, meaning they eat both plant matter and other animals. As with many fish, this plays an important role in their captive diet as well.

These fish should be offered sinking foods that are high in plant material, such as algae wafers. They should also be fed brine shrimp or mosquito larvae once or twice a week to ensure they get enough protein.

Dwarf gouramis tend to dart about the surface of the tank, picking at food and interacting with other fish. Some dwarf gourami species, such as the banded and moonlight, are known for their bolder nature and will often swim with other fish of similar size.

Dwarf gouramis tend to be aggressive towards other dwarf gourami. They can normally live together if there is enough surface area and hiding spots available, however, they will become territorial and more aggressive as they mature.

They may also attack other fish of the same or smaller size. This can be prevented if you house them with larger fish such as bettas, since it is difficult for the dwarf gourami to compete with these active swimmers.

Dwarf gourami are bubble nest builders, meaning they create a structure of bubbles on the surface of the water that they then lay their eggs in. They will form these structures constantly if there is enough room for them to dart about.

Male dwarf gouramis also possess bristles on their dorsal fins, which act as protectors around the female while she is laying. In addition, the male builds a “greenhouse” of bubbles on the surface of the water to protect against predators while he stands guard outside it.

The female will lay 300-500 eggs before they fade out and then the male takes her inside his bubble nest.

Dwarf gourami are excellent community fish that do well in a tank with a dark substrate and densely planted edges. A 20-gallon tank provides enough swimming space for a single pair, with the additional surface area being more important than volume.

Dwarf gourami also builds bubble nests, so it is important to have a place for them to dart in and out of. 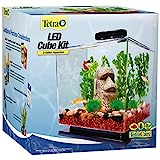